The Lineage of Tools 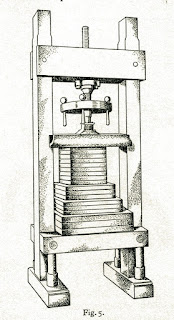 I trained as a bookbinder in Morocco with a Abdelfetah Rahali, a quiet man who spoke Arabic alone. So I learned by watching. And after watching, I learned by doing. Eventually, to make up for what I did not understand, I read widely about bookbinding, first on the internet and then classics like Edith Diehl's Bookbinding: It's Background & Technique.

Not long ago, while working with Monique Lallier, the doyenne of North American bookbinding, I told her how important Diehl's book had been for me.  She looked up and smiled. "Come."

I followed her to the hall and she stopped in front of a press made of timbers, steel and brass. It stood about seven feet tall.  "That," she said, "was Edith's press." I recalled an etching in Diehl's book and indeed, it was the same press. Later she showed me a paring knife given to her by Swiss master binder Hugo Peller.

It seemed that many of the tools she owned had a lineage, a history that she was keeping alive.

The same was true in Morocco. When I first began sewing my own books at the shop with Abdelfetah, he pulled out a sewing frame from the corner. It was covered in dust. He wiped it down with a rag and handed it to me.

As I began to tie up the cord, Abdelfetah laughed and pointed at one of the uprights. Pasted onto the wood was a cut-out image from an old advertisement of a woman in a bikini. Though I spoke no Arabic, it was clear that the man who last used it often admired her while he sewed.

"He's dead now," he said, and went back to sewing.

Other tools suggested an even darker history. Behind my station was an enormous German Kraus guillotine. It probably weighed as much as two Volkswagons. A large wheel operated a set of gears that dropped an enormous blade in a controlled fall that we used to slice through five inch thick books like butter. I shuddered whenever I thought of what it could do to an arm, never mind a finger. This device arrived in the shop from the Netherlands shortly after WWII. Many bookbinders died in the war and a good number of binderies didn't survive either. Is that how the tool ended up in the basement of a bindery in northern Africa?

But I digress. I wanted to focus on the idea that some tools have lineage. Oddly, the computer I am typing on will be recycled within a few years, but my century-old backing press will be used by me and ultimately passed on, along with my type, my paring knives, and my pallets. Somebody else will use them to create.


Using these tools is an act of caretaking. They will eventually belong to someone else. My job is to use them as well as I am able.
Posted by Michael Greer at 4:32 PM 1 comment:

Email ThisBlogThis!Share to TwitterShare to FacebookShare to Pinterest
Labels: tools

Tools of the Trade 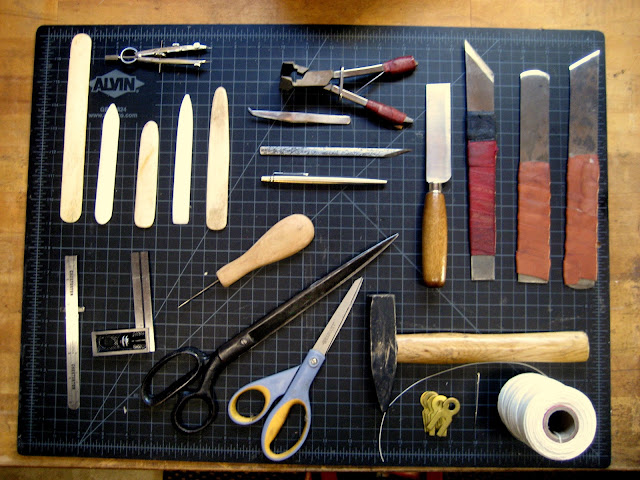 
Craftsmanship results from the mingling of tools, materials and human skill. It's easy to be convinced by pornographic photos of beautiful tools that the most important element in this triad is the tool, but the fact is I've witnessed superior craftsmanship made with the poorest of tools. Putting together a collection of bookbinding tools can be intimidating, as they are sometimes difficult to find and expensive. While some bookbinding tools are absolutely necessary, others can be made from simple materials or other tools can be re-purposed. The key is to start using them, for the magic begins when we learn to make the most of the tools we own.